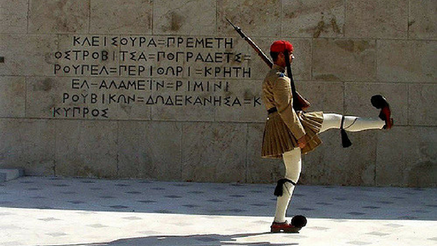 The above translates word for word as, “O stranger, announce to the Lacedemonians that here / We lie, to their words [or laws] obedient.” [2]

On October 28th, 1940, the Italian Ambassador to Greece delivered an ultimatum from Benito Mussolini to Prime Minister Ioannis Metaxas, demanding free entrance, passage, and occupation by the Italian army. Metaxas replied, “Alors, c’est la guerre”, translated to “Then, it is war”, which was quickly celebrated as a defiant “ΟΧΙ!” or “NO!”.

For many years, many individuals in Greece, the diaspora, and foreign politicians, have celebrated and commemorated this occurrence as a great symbol of defiance and resistance. Over time, the spirit of Metaxas’ utterance has come to encompass a symbolic “no” against any aggression or transgression one may face.

It is hard to imagine that Metaxas was considering the future value of such symbolism or generalized philosophical principle. At the time, something much more psychologically, culturally, and spiritually ingrained would have underpinned and motivated this action – action because it goes far beyond being a response or stance. Protestors can respond, grandstanders can stand, and naysayers can reject. Metaxas thought beyond that and took affirmative, unequivocal action with far-reaching, grave repercussions. He was prepared to go to war, sending the entire military – the entire draft-ready population – up into the mountainous borders to fight against the Italians. As a well-versed military strategist, he must also have known that even if he were to successfully stave off the Italians, he would have to then prepare Greece for the totality of the Nazi war machine.

It is not inconceivable that a legacy and dormant pride – a mandate – inherited through the millennia, prevented him from subverting not only his authority, but the sovereignty of Greece, and the freedom of its people. It is not impossible to imagine that Metaxas heard King Leonidas’ simple order to “Remember [them]”, to “Remember why [they] died”; he heard “[their] voices whisper to [him] from the ageless stones…”. Simonides inscribed, with such sentiment, on the cenotaph of the Isthmus of the Corinthians who fought at the Battle of Salamina:

He may have also reflected on the courage and selflessness of the heroes of the War of Independence in the 1820s, of whom several, like Bouboulina, gave up their comfort and wealth to aid in liberating their country from 400 years of Ottoman occupation.

Metaxas was guided and fueled by the knowledge of sacrifice that had ensured the freedom of Greece, deciding that its preservation warranted nothing less than the ultimate sacrifice.

The effects of that “OXI” led to the reputed claims of nationwide unity, defiance, and above all, the shared understanding, responsibility, and honor of sacrifice. One such claim denotes that even though five days were given for drafted men to present themselves, most came forth on the first. Another goes further, saying several famous personas and children of established, well-connected statesmen used their influence to volunteer themselves for the front lines. Among them were academics Alekos Lidorikis and Spiros Melas, as well as Odysseas Elytis, Nikiforos Vrettakos, Aggelos Terzakis, Nikos Kavvadias, Konstantinos Mitsotakis, Georgios Rallis, and Harilaos Florakis.

It is this purpose and motivation in action, this sentiment – this call of duty – that generated the courage necessary to stave off the Italians, and delay the Nazi strategic advancement by over two months. As Adolf Hitler admitted, “Historic justice forces me to admit, that of all the enemies that stand against us, the Greek soldier, above all, fought with the most courage.”
The defeat of the Italians was the first greatest indication that the Axis alliance was not undefeatable. Secondly, the delay in the Nazi occupation of Greece caused a delay in their advancement to the USSR, causing them to fight the Russian army in the harsh winter conditions – conditions that proved a telling factor in balancing the favor towards the Russian army, providing a much more devastating and conclusive blow to the Nazi war machine. As Joseph Stalin credits, “[We] thank the Greek People, whose resistance decided WWII… You fought unarmed and won, small against big… You gave us time to defend ourselves.” No one else but Hitler’s Chief of Staff, Field Marshal Wilhelm Keitel, as a defendant during the Nuremburg Trials, testified to this effect, saying, “…the unbelievably strong resistance of the Greeks delayed by two or more vital months the German attack against Russia; if we did not have this long delay, the outcome of the war would have been different in the Eastern Front and the war in general.”

It is not the defiance alone, but the legacy of our ancient and more modern forefathers, rooted deep in our psyche and identity, that gives birth to the incredible moral and physical courage required not only to act, but to act decisively, fighting against all odds, to change the course of history. After all, on the same day he rejected the ultimatum, in his address to the Greek people, Metaxas ended with the following line from Aeschylus’ play The Persians: «νῦν ὑπὲρ πάντων ἀγών.» [4]

1. Simonides of Ceos
2. A more popular translation is “Tell them passerby, that here, by Spartan law, we lie.”
3. It translates to: “All Greece stood on the razor’s edge: we lie here, having rescued it with our own lives”
4. It translates to: “Now is the fight for everything”